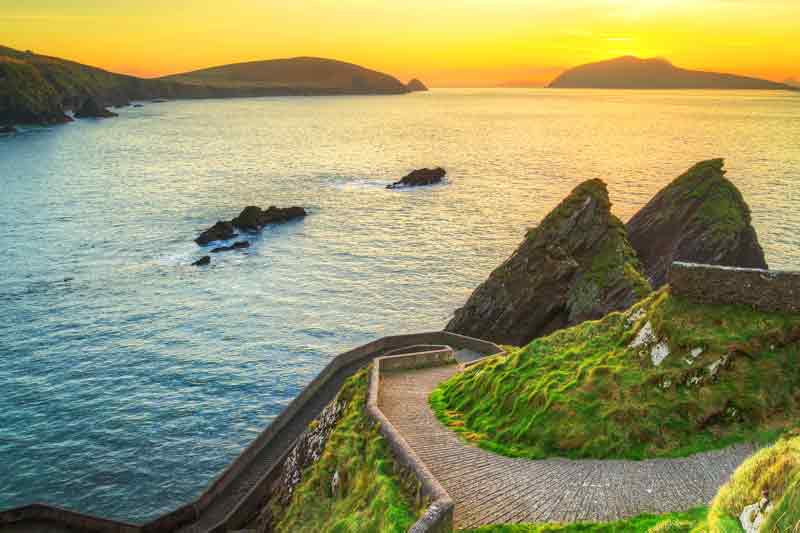 New Year Celebrations
A dazzling fireworks display on the Dingle Marina welcomes in the New Year and then off to a pub for the ulitimate New Year celebration. Close to midnight, all locals and visitors converge at “The Bridge” for the begining of the countdown to the New Year.

Dingle Walking Festival
A walking festival for  walking enthusiasts of all ages and levels the opportunity to experience Dingle Peninsula’s geological jewel first hand for themselves.
www.dinglewalkingfestival.com

Scoil Ceoil an Earraigh
A traditional music school held in Ballyferriter  on the Dingle Peninsula  (Co. Kerry, Ireland) including singing and dancing workshops, concerts & sessions and much more…
www.scoilcheoil.com

St Patrick Day
The Dingle Fife and Drum Band herald the arrival of St. Patrick’s Day with a morning chorus parade around the town at 6.30pm and then lead colourful floats on the annual parade around Dingle Town.

Béal Bán Horse Races
The annual Béal Bán Races are held on a beach beside Ballyferriter village just west of Dingle. Come and enjoy the races in a superior environment on the shore of Smerwick Harbour.

2nd Castlegregory Traditional Music and Setdancing Festival
Traditional Irish Music is known today throughout the world & in keeping with Irish tradition, we bring to you a celebration of the past, present & future of Ireland’s Music.
More details at www.dingleirish.com

Dingle Adventure Race
A one day Multi Activity Adventure Race consisting of Bike, Hike, Run and Kayak. The 30 mile/ 48km course will take you to some of the gems of the Dingle peninsula, Co. Kerry, Ireland.
www.dingleadventurerace.com/

Maharees Regatta
The Maharees Regatta annual naomhóg racing is held just north of Dingle Town in the scenic Scraggane Bay. The regatta attracts crews from counties Galway and Clare as well as local crews from all around the Dingle Peninsula.

Castlegregory Summer Festival
A family orientated festival which celebrated its 63rd year in 2011.

Dingle Races
Early August
An annual horse racing event, a must on any calendar .
Read more at www.dingleraces.ie»

Brandon Regatta
The Brandon Regatta is held just north of Dingle Town in Brandon village. Brandon regatta is a series of traditional curragh (boat) races with many different categories. Contesting boat teams travel right up the west coast of the Dingle Peninsula. Winners and losers alike celebrate with music and song afterwards.

Féile na Lúnasa (Festival of Lughnasa)
Féile na Lúnasa (Festival of Lughnasa) is a revival of an ancient pre-Christian celebration of the harvest that is held annually just north of Dingle Town in the Cloghane/Brandon region. This is a community based festival that features music, street theatre, a treasure hunt, and art workshops. The outings following the story of Jesus in Dingle and the lectures, especially the Celtic Year add depth to the festival.

The Dingle Marathon
Compete in a half or full marathon in what is probably one of the most spectacular settings for road running
More information at www.dinglemarathon.ie

Other Voices
An exhilerating gathering of Irish and International music talent
www.othervoices.ie

Wren’s Day
December 26th
Dingle Wren boys take to the street in a blaze of colour continuing an unique and unbroken folk tradition that was for many centuries practised in most parts of Europe. The Dingle Wren is a memorable day of marching, music and dance. Dingle Town is a hive of activity as Dingle’s Wren Boys bring an explosion of colour and boisterous exuberance that is welcome in the midst of winter’s gloom.

New Year’s Eve
December 31st
A few hours before midnight the annual fireworks display lights up the sky over Dingle Harbour. Close to midnight, all locals and visitors converge at “The Bridge” for the begining of the countdown to the New Year.

“THERE’S ALWAYS SOMTHING TO DO
IN THE DINGLE PENINSULA”

This website uses cookies to improve your experience while you navigate through the website. Out of these cookies, the cookies that are categorized as necessary are stored on your browser as they are essential for the working of basic functionalities of the website. We also use third-party cookies that help us analyze and understand how you use this website. These cookies will be stored in your browser only with your consent. You also have the option to opt-out of these cookies. But opting out of some of these cookies may have an effect on your browsing experience.
Necessary Always Enabled
Necessary cookies are absolutely essential for the website to function properly. This category only includes cookies that ensures basic functionalities and security features of the website. These cookies do not store any personal information.
Non-necessary
Any cookies that may not be particularly necessary for the website to function and is used specifically to collect user personal data via analytics, ads, other embedded contents are termed as non-necessary cookies. It is mandatory to procure user consent prior to running these cookies on your website.
SAVE & ACCEPT